It’s easy to fall in love with Copenhagen, a city at once historic and modern, traditional and innovative. Known for its design scene, top-notch cuisine and hip, laid back atmosphere, this Scandinavian capital is certainly not considered a budget destination. Surprisingly, though, there is a multitude of experiences to be had for no cost at all, among them some of the most famous sights that Copenhagen has to offer.

Its vibrant colours and historic tall ships make Nyhavn Copenhagen’smost famous destination. Stroll down the less famous side for the best views and photographs, and to look at the lighthouse ship Geyser Rev, as well as house number 20, where beloved Danish author Hans Christian Andersen was living in 1835 when he published his first volume of fairy tales. 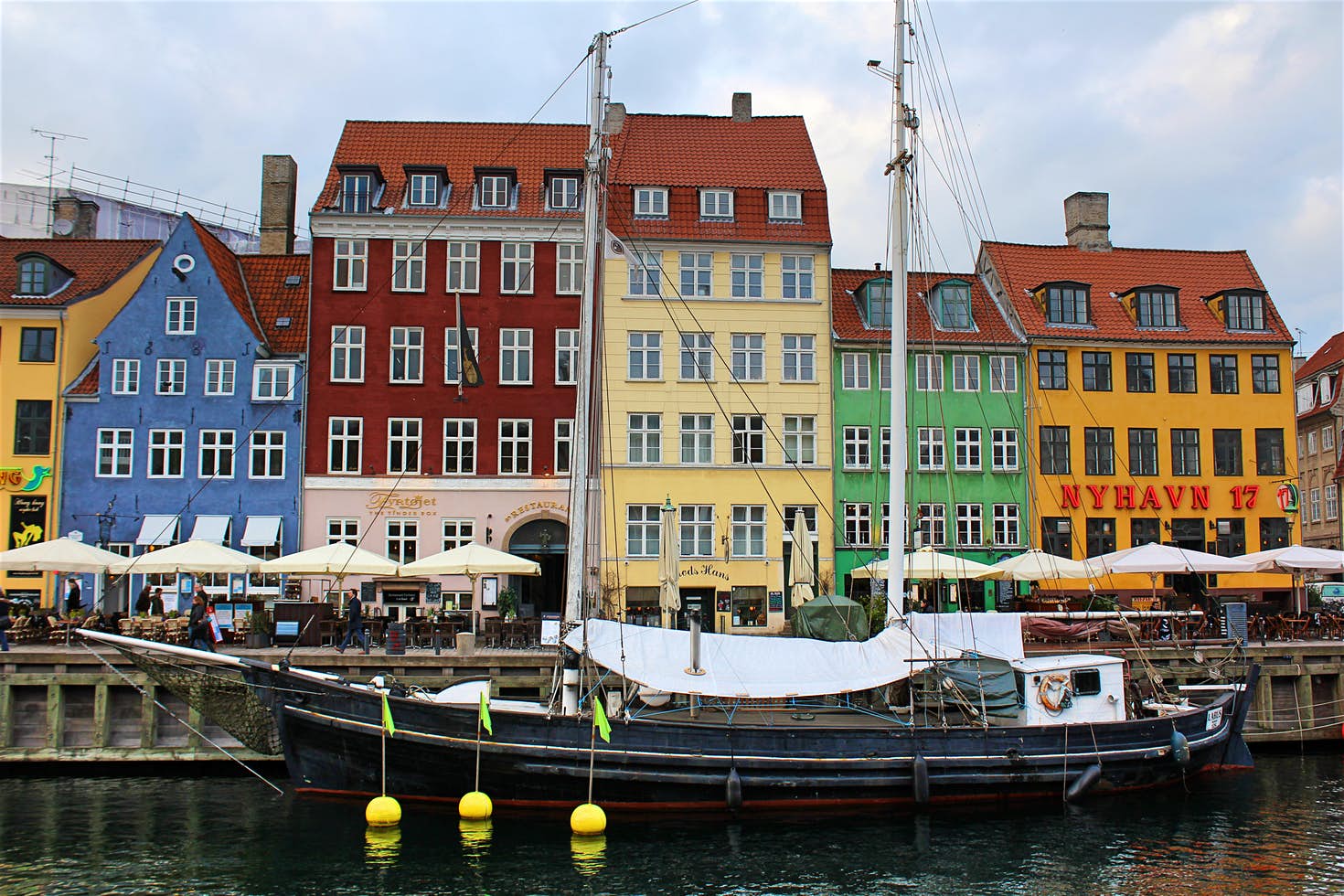 To avoid the sky-high prices of the harbourside restaurants, do as the locals do and pick up a snack and some beers to enjoy a picnic at the water’s edge. And don’t let the crowds discourage you from going to see this picturesque harbour in high season; it’s still well worth the visit.

Marvel at the views from Christiansborg

Christiansborg Palace is home to the Danish Parliament and Royal Reception Rooms. Although there is a fee to tour much of Christiansborg itself, entrance to the tower and church are free. Christiansborg Tårnet is Copenhagen’s highest viewpoint, with stunning views in all directions. From here, you can take in the sweeping cityscape and even see across the water to Sweden.

Mystical mountaintops and incredible coastlines: the lesser-known jewels of Wakayama 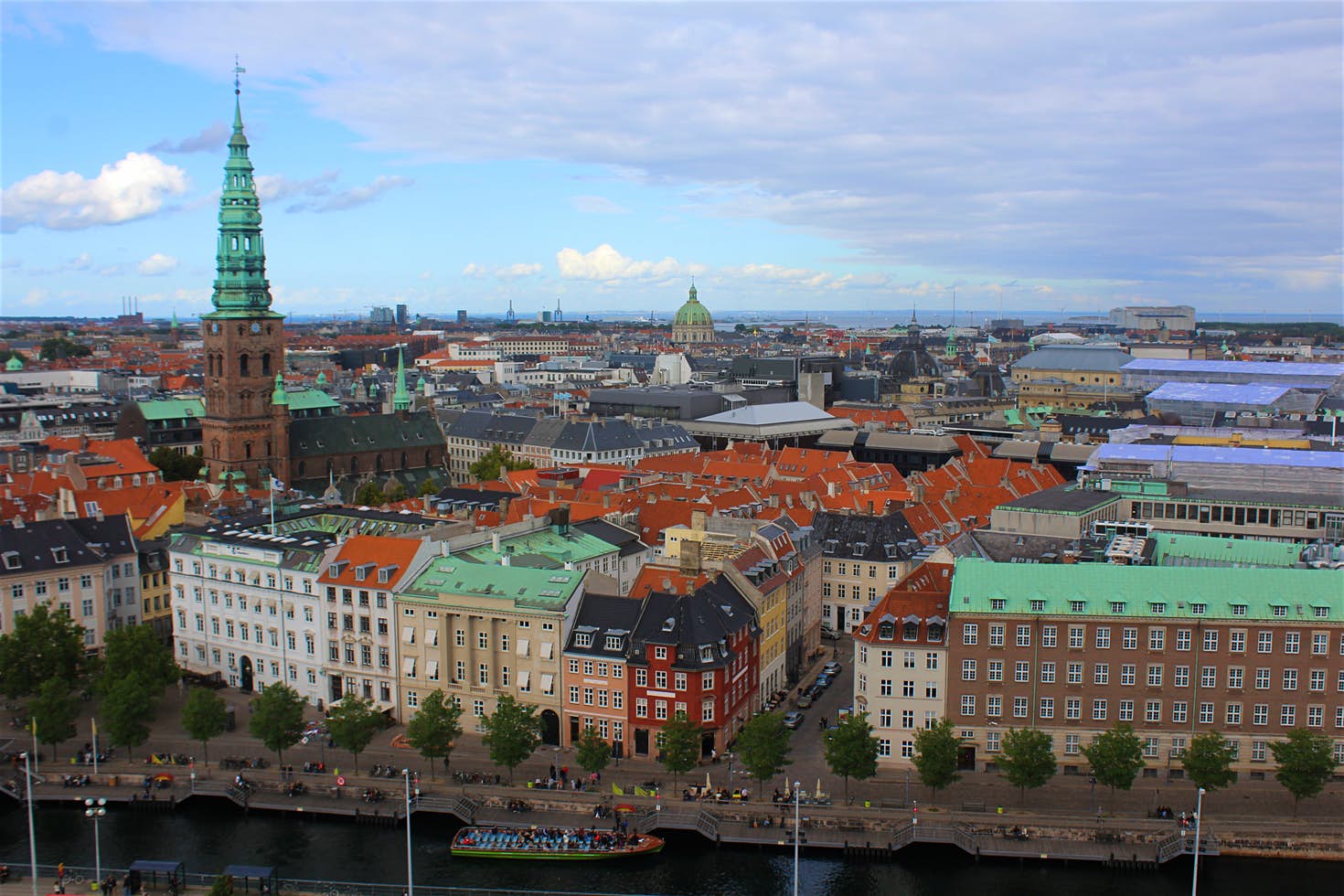 A view of Copenhagen from the tower at Christiansborg Palace

The adjoining Christiansborg Kirke is the official church of the Danish Royal Family, site of formal events like christenings, confirmations, and funerals. Behind the tower is the outdoor Royal Riding Ring, where you can often spot some of the Queen’s 20 white horses enjoying warm weather or training for their royal duties.

Promenade along the harbourside

Visitors from all over the world eagerly flock to see Copenhagen’s most famous resident, Hans Christian Andersen’s The Little Mermaid. Perched on her rock, the sculpture is much smaller than many expect, and some say she is an overrated attraction. However, the walk up the harbourside is worthwhile, as there are other sights to take in on your way to visit the iconic mermaid. The Gefion Fountain, featuring the mythical Gefion and her oxen, is an imposing creation overlooked by St Alban’s Church. Behind the fountain is Kastellet, a star-shaped fortress built in the 1600s to defend the city, and visitors are free to stroll the grounds and its historic buildings and windmill. 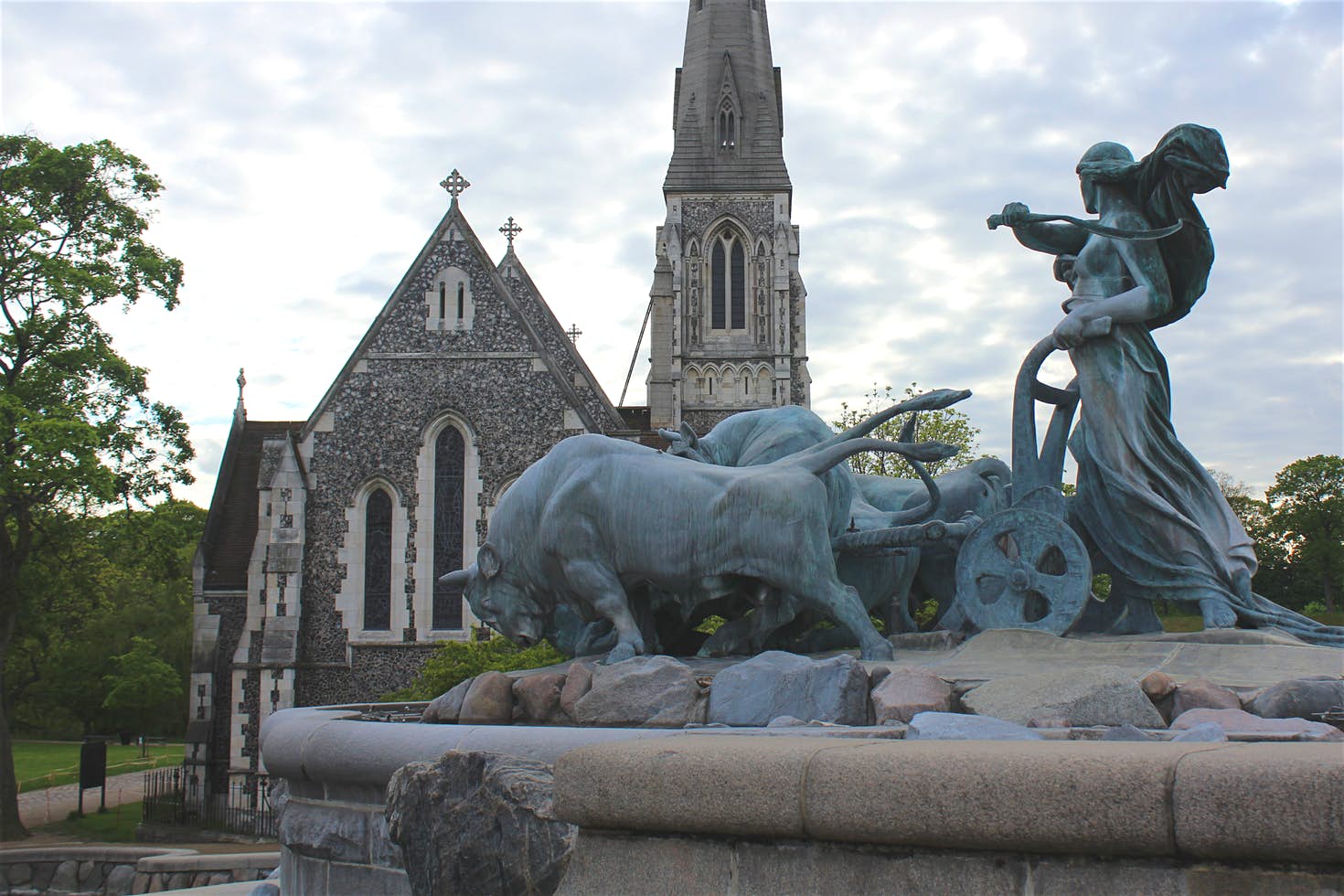 Gefion Fountain and St Alban’s Church, along the Harbourside Promenade

Copenhagen is home to an impressive range of historical and art museums. The formerly free Statens Museum for Kunst and Nationalmuseet unfortunately began charging admission fees for adults in summer 2016, though under-18s can still enter free of charge. You can still get your fill of amazing artworks without paying a thing, however. The sprawling Ny Carlsberg Glyptotek is filled with sculptures and paintings by the likes of Rodin and Van Gogh, along with historic artifacts, and can be explored for free on Tuesdays. The more quaint Thorvaldsens Museum, next to Christiansborg Palace, is entirely dedicated to works and collections of Danish sculptor Bertel Thorvaldsen, and is free to enter on Wednesdays. Also free on Wednesdays is the nearby Nikolaj Kunsthal, a contemporary arts centre housed in a former church whose magnificent spire towers over the city. All three museums are housed in beautiful buildings and offer an inspiring collection of works to discover.

Pedestrianised Strøget is the hub of Copenhagen’s lively centre. One of the longest and oldest pedestrian streets in the world, it’s a shopping paradise, particularly for Danish design. Walking from one end of Strøget to the other, you’ll discover historic buildings, squares, and fountains. At the bottom end sits Rådhuspladsen, home of Copenhagen’s Italian-inspired City Hall, where visitors can admire the ornate lobby and marvel at Jens Olsen’s World Clock, an incredibly intricate piece of timekeeping. Exploring Rådhuspladsen, you can discover the Gothic-style Dragon Fountain, the popular statue of Hans Christian Andersen, and the stone pillar marking the former site of Vesterport, the western gate of the city once surrounded by walls.

Take a breath of fresh air in Copenhagen’s green spaces

Copenhagen is full of green spaces, but the King’s Gardens are especially lovely. The gardens serve as the sweeping grounds of Rosenborg Castle, which was built as the Royal summer home in the 1600s and is now a museum. 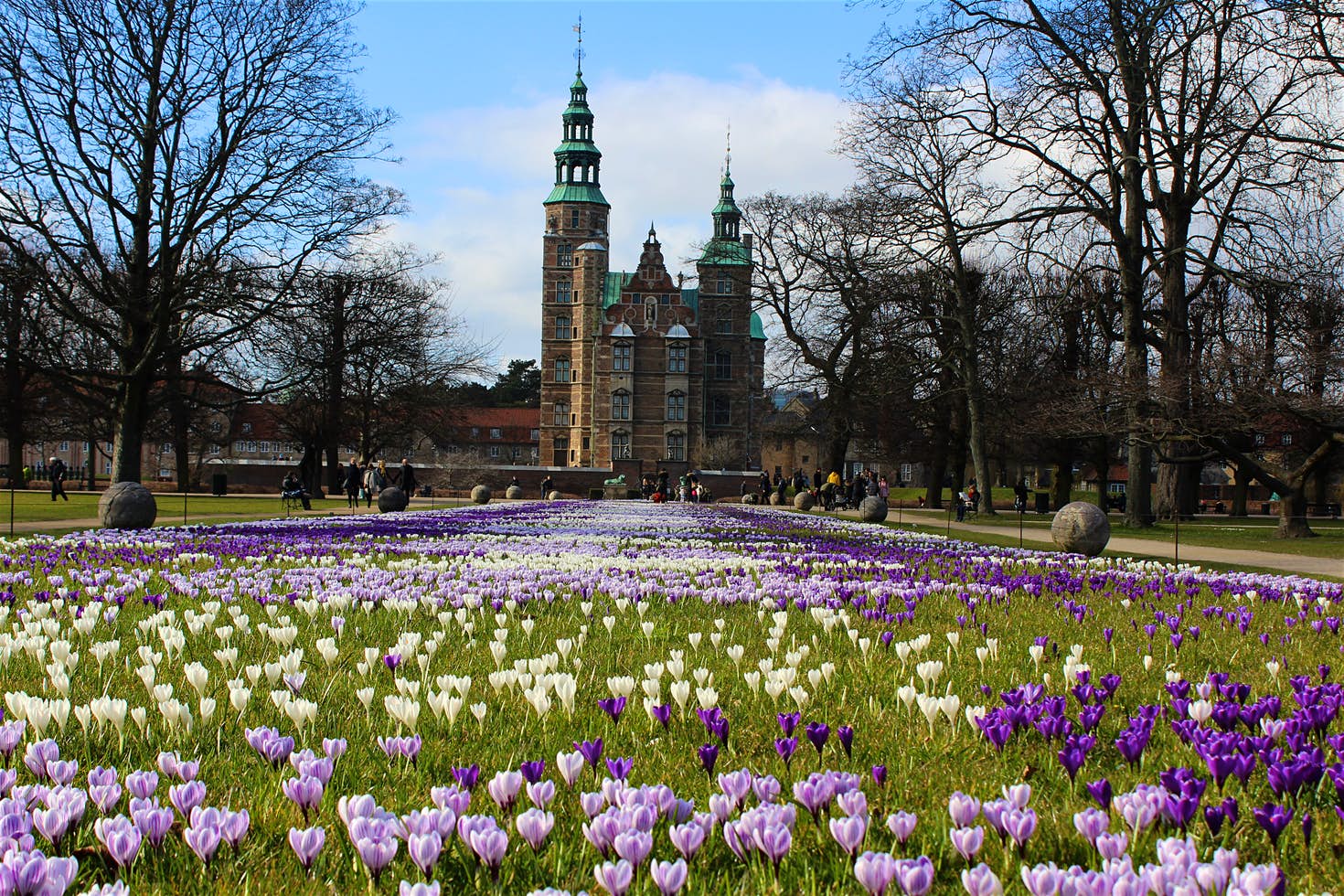 The gardens are the perfect place for a quiet stroll to admire the flowers, tree-lined alleys, and sculptures. It’s also a popular spot with locals to enjoy a picnic in warmer weather. The nearby Botanical Gardens is a 10-hectare oasis boasting 13,000 species of plants, flowers and trees, as well as a lake and a series of glasshouses.

Have a right royal time at Amalienborg Palace

Amalienborg Palace is the official city residence of Queen Margrethe II and the Danish Royal Family. It’s unique in that the palace is made up of four former mansions facing a central square. The best time to visit Amalienborg is at noon to witness the Changing of the Guard. Every day, members of the Royal Life Guard march through the city from their barracks to the palace to take over the watch. 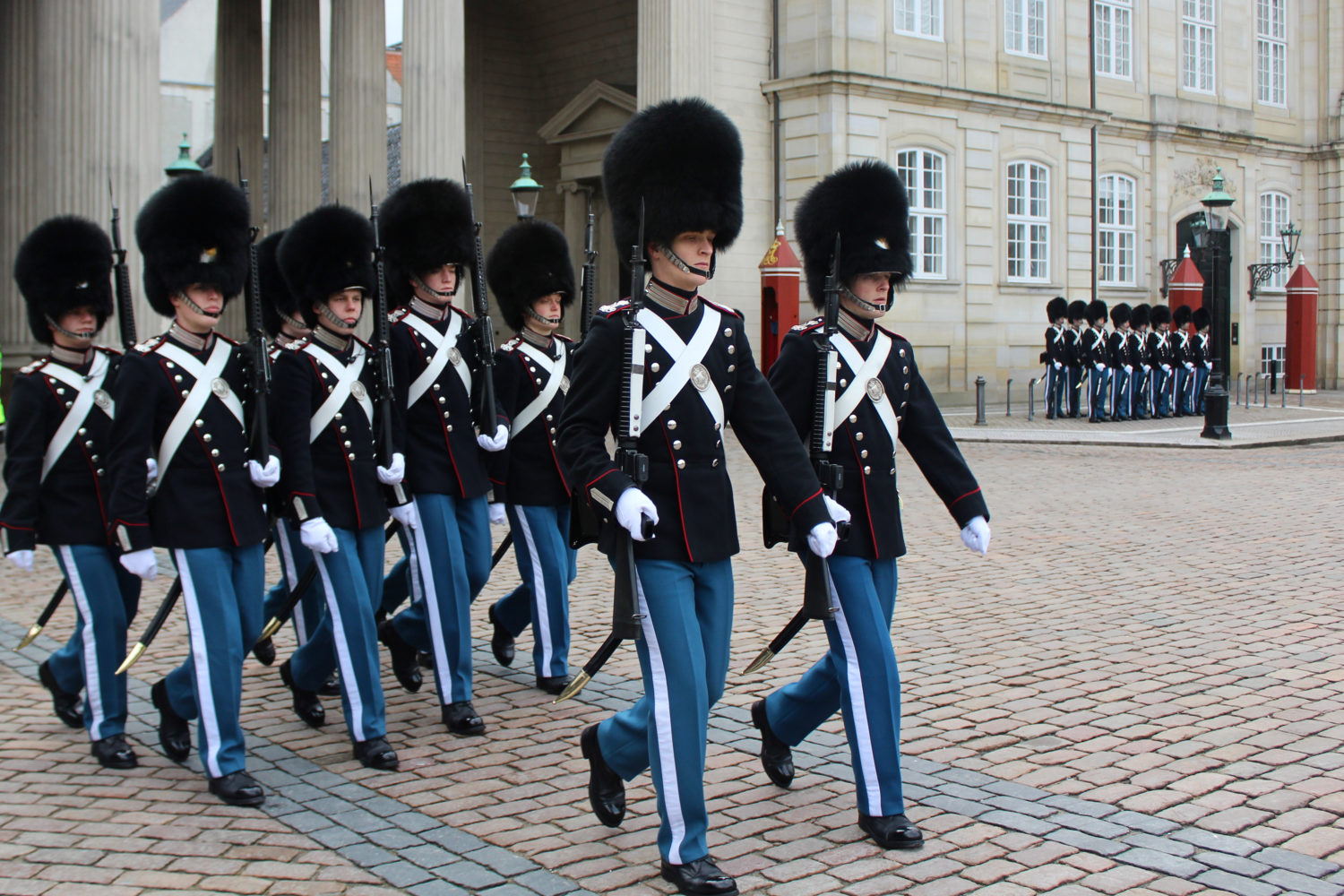 The Changing of the Guard at Amalienborg Palace, residence of the Danish Royal Family © Caroline Coupe / Lonely Planet

Seeing these soldiers march around the courtyard in their midnight-blue uniforms and distinctive bearskin helmets is a fascinating spectacle, even more so when the Queen is in residence as they are then accompanied by a marching band. Frederik’s Church is also part of the Amalienborg complex, and is open to the public. Enter and marvel at its ornate dome, the largest in Scandinavia.

Savour the flavours of Torvehallerne Market

Torvehallerne is a wonderland of food, a place where everyone from home cooks to professional chefs go to source fresh, local produce. Within the complex of two glass halls and many outdoor stands, you can shop for quality ingredients for a dinner at home, pick up goodies like wines, teas and chocolates, or sit in and enjoy one of the many cafes. 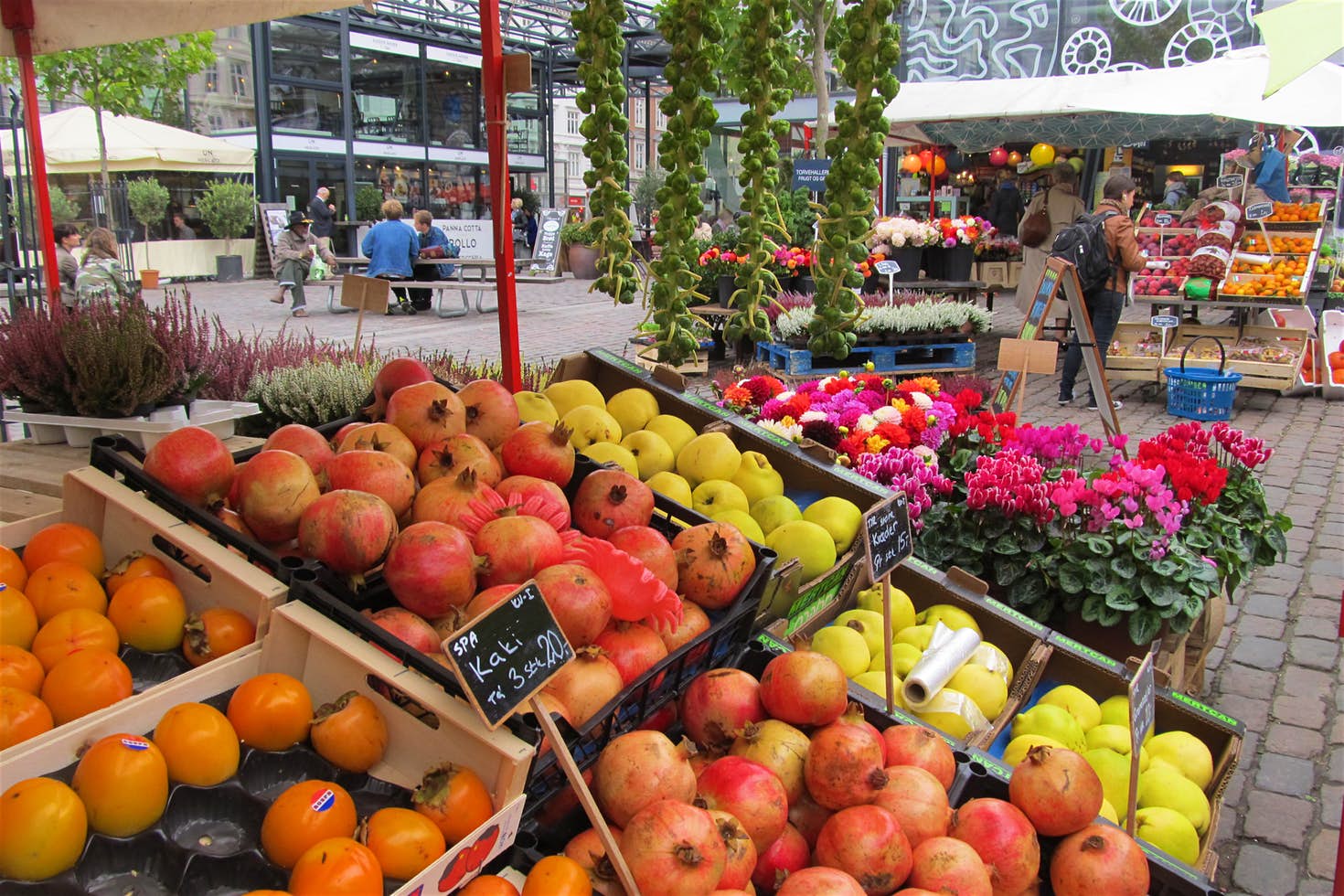 If you’re keen to sample some of the local cuisine, try an open-faced smørrebrød sandwich from Hallernes, or a gourmet pølse – Danish hot dog – from Pølse Kompagniet.

Discover both sides of the Royal Library

The island of Slotsholmen, the seat of Danish government, is home to much more and is worth taking the time to explore. A unique feature is the Royal Library, which is made up of two sections: the original building, founded in 1648, and the modern extension, completed in 1999. The newer part of the library sits gleaming on the shores of Copenhagen harbour, and is known as the Black Diamond due to its shiny marble exterior. 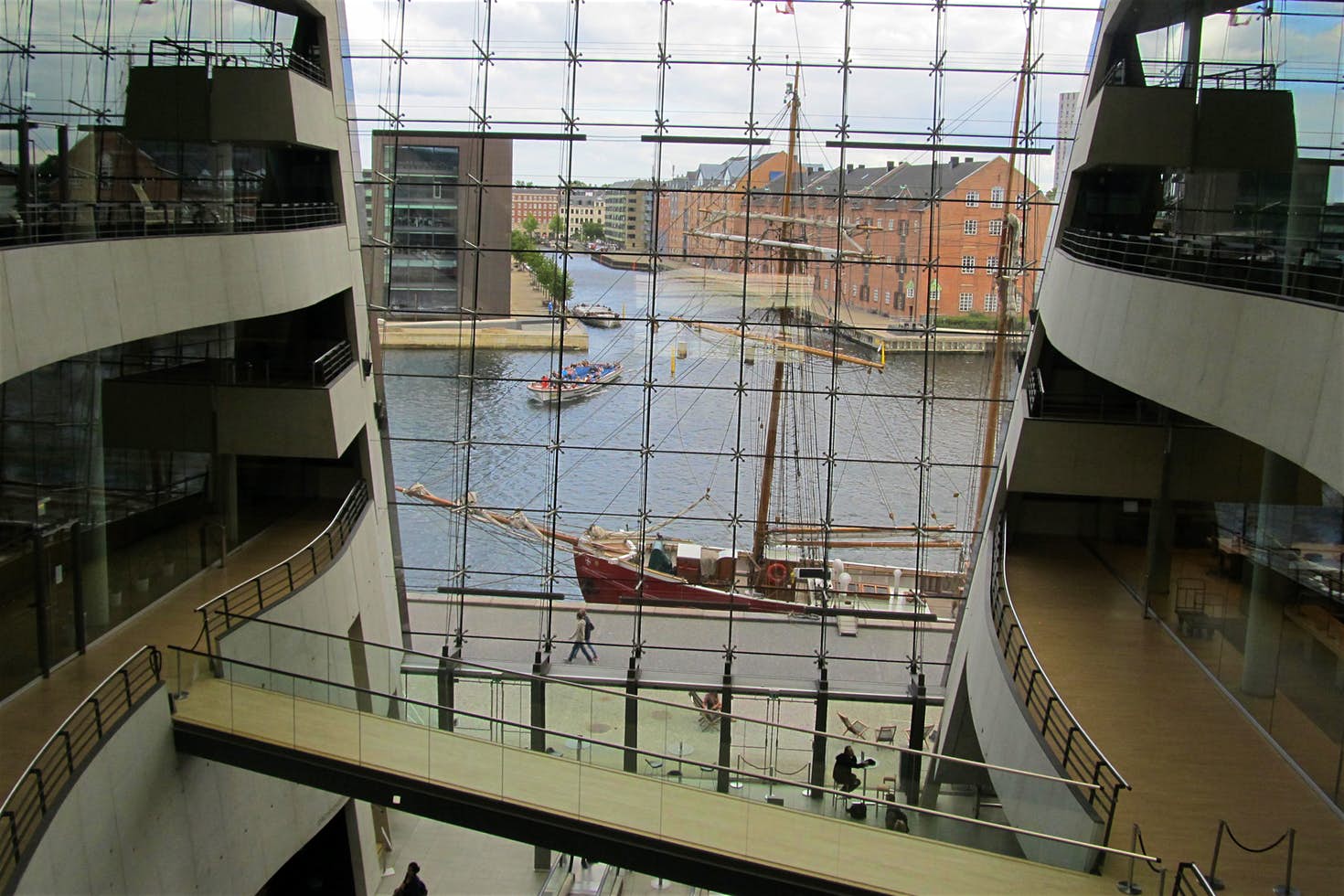 The library holds almost every book ever printed in the Danish language, dating back to 1482. The interior is a fascinating piece of architecture, whose central hall is accessible to the public, but the books must be reserved in advance and accessed in one of the reading rooms. Between the charming historic side of the library and the entrance to the Danish Parliament sits a peaceful hidden garden, where you can sit by the fountain and take a break from your busy day of exploring.

Found on the island borough of Christianshavn, the Free Town of Christiania is a unique and somewhat controversial part of Copenhagen. It was established in 1971 when, in the midst of a housing shortage, squatters took over an abandoned military base and formed an alternative society. 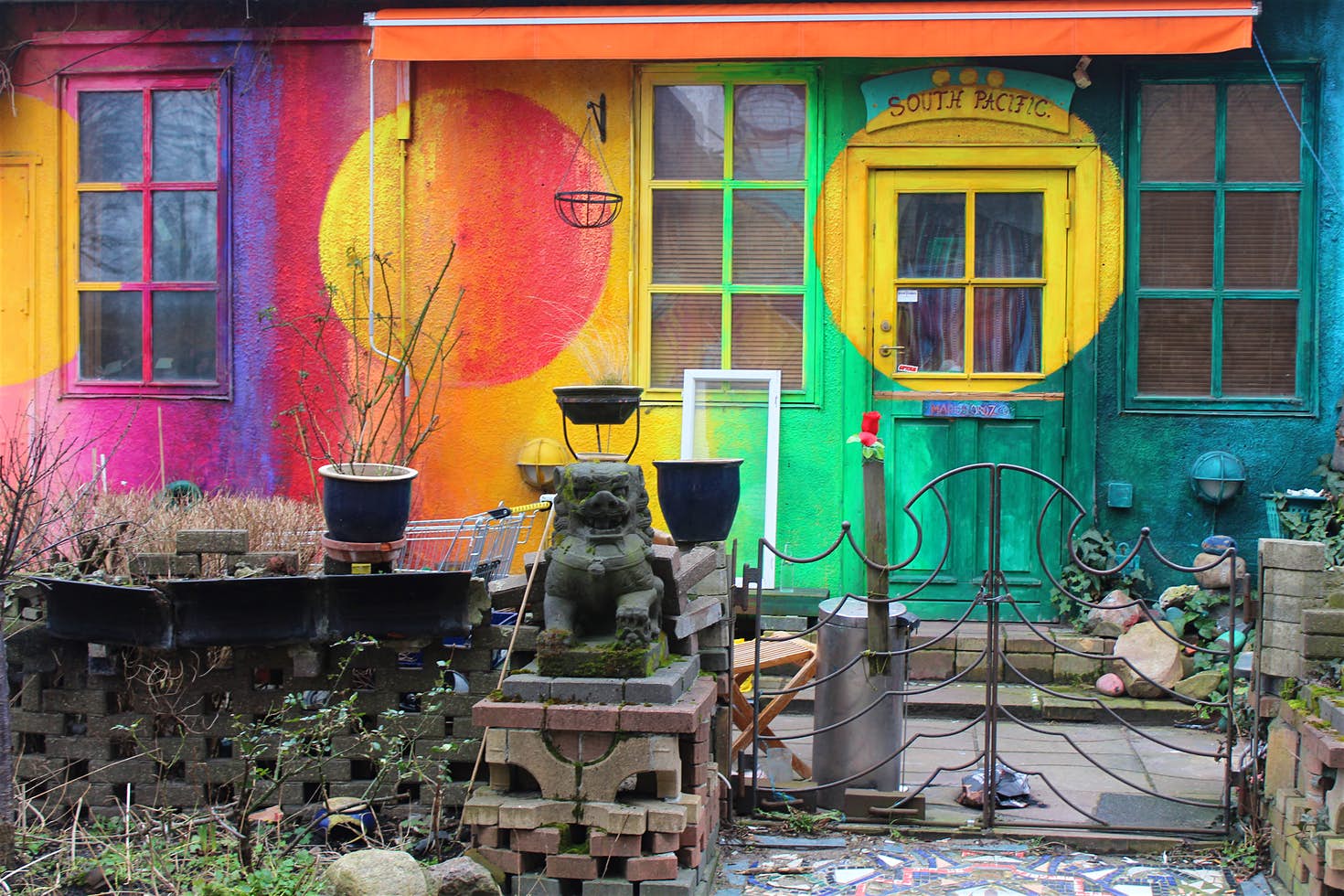 A colourful home in the Free Town of Christiania

Best known for its Green Light District, the gritty main district filled with marijuana dealers and smokers, Christiania is an expansive area covering 34 hectares, including nature trails and a lake. The Free Town is also home to restaurants and bars, a market, artist workshops, and concert venues. There is plenty of street art to admire here, and residents live in converted army barracks or unique hand-built homes. It’s a fascinating place to catch a glimpse of a non-traditional way of life.